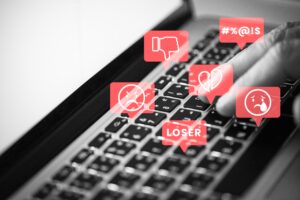 The Children’s Rights Alliance is calling on the Government to provide a well-resourced online safety commissioner to tackle Big Tech companies over abusive posts on their platforms.

The Children’s Rights Alliance has called on the Government to act now to implement safety measures to make the internet safer for children and young people.

The alliance is supporting the new Online Safety and Media Regulation (OSMR) Bill as part of its new campaign, which was launched today (13 July) at a virtual event.

The alliance of 15 campaigners seeks the appointment of a well-resourced online safety commissioner with an independent individual complaints mechanism for when online platforms fail to adequately or appropriately deal with an individual’s complaint.

Their appeal comes following the slew of racist online abuse targeting several members of the English football squad who were runners-up in the UEFA Euro 2020 final over the weekend.

The British government is introducing a similar online safety bill to hold large tech companies to account over the abuse posted on their platforms. This Online Safety Bill would allow British media watchdog Ofcom the power to fine companies up to 10pc of their annual global revenues for breaches.

Spokespersons from Twitter and Facebook said the platforms were removing the racist abuse targeted at players Marcus Rashford, Bukayo Saka and Jadon Sancho after their team lost their final match against Italy on Sunday.

However, some offensive tweets and Instagram posts were still live at about 1pm on Monday.

Tanya Ward, chief executive of the Children’s Rights Alliance here said tech platforms should be held accountable for the abuse.

Speaking about the opportunities presented by the OSMR Bill and the key concerns for children and young people, Tyndall said: “My experience as ombudsman reminds me just how important independent, individual mechanisms are for people who have a complaint about a body or agency that they believe has not treated them fairly.

“The purpose of my office, and I imagine it will be similar for a newly established online safety commissioner’s office, is ultimately to help people find a resolution when their voices are not being heard by the body who has made a decision that is not in line with fair procedures.”