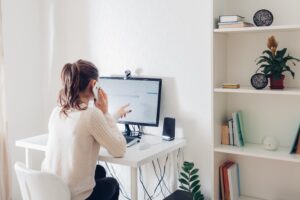 Ireland has one of the highest availability rates for remote working roles across eight labour markets monitored by LinkedIn.

Remote working options are continuing to grow, with almost one in every five (19pc) Irish jobs postings on LinkedIn now offering it.

That’s according to the latest Labour Market Pulse report by IDA Ireland in partnership with LinkedIn and Microsoft.

The latest report covered the three-month period between October and December 2021. It found that remote working options in Ireland have increased since the previous quarterly report, which found that one in seven jobs postings on LinkedIn offered remote working.

This represents a 118pc year-on-year increase on the availability of flexible work roles, placing Ireland as one of the highest countries for the availability of remote roles across eight markets monitored by LinkedIn. Ireland came second behind Spain, and ahead of France, the Netherlands, Sweden, Germany, the United Arab Emirates and the UK.

The share of job postings in the software and IT services industry group increased by 22pc year on year, while there were increases of 9pc in the finance industry and 6pc in transport and logistics.

IDA Ireland CEO Martin Shanahan welcomed the data showing an increase in remote working opportunities, which he hopes will allow “employers to tap into the talent base across all regions of Ireland”.

James O’Connor, VP of Microsoft International Operations, added that the growth in the number of job postings that include the option to work remotely “demonstrates the degree to which the Irish economy is continuing to digitally transform”.

“It’s clear an increasing number of Irish-based employers are providing greater flexibility to employees who are seeking to embrace this new era of hybrid working,” he said.

“In a climate where employers continue to face challenges in terms of attracting and retaining talent, it’s hugely positive to see hiring rates continue to grow and sectors that were more exposed to the challenges of Covid-19 begin to recover.”

Sharon McCooey, head of LinkedIn Ireland, said the January hiring data is also pointing towards “continued momentum” into the year ahead.

“Globally we are at a unique inflection point with people re-evaluating how, where and why they work – and Ireland is no different as we can see from the heightened activity across our 2m-strong membership,” she said.

As many other recruitment experts have suggested recently, McCooey added that it is very much a jobseekers’ market thanks to the number of options available. “In order to continue to attract the best talent, employers need to continue to offering the same level of flexibility that people have become accustomed to over the past two years,” she cautioned.