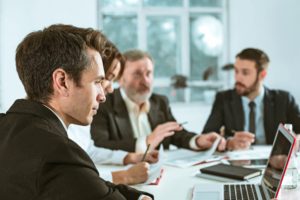 The NWCI is urging the Irish Government to establish a 40pc legislative quota to boost gender balance on non-State boards.

The National Women’s Council of Ireland (NWCI) is calling on the Government to introduce gender quotas for corporate boards.

In 2018, the Government established a business-led review group that aims to address the gender imbalance at senior levels in Irish business with voluntary targets for women on leadership teams and company boards.

However, the NWCI is now appealing for the introduction of a 40pc legislative quota for female representation on non-State boards.

In a report launched last week, the NWCI said women remain significantly underrepresented in senior leadership roles and in the boardrooms of Irish companies.

“Despite often better educational outcomes, women continue to be overlooked and undervalued by an outdated and rigid set of policies and practices,” said Orla O’Connor, director of the NWCI, at the report launch.

“The lack of women in leadership positions means women are excluded from the rooms of power, where key decisions affecting their lives are made,” she added. “Our boardrooms should be reflective of society today – it’s time to balance the odds.”

Several STEM organisations such as Women in Technology and Science (WITS) and Fastrack into IT are members of NWCI.

Jean O’Donnell, communications lead with WITS, told Siliconrepublic.com: “Women in Technology and Science Ireland are very supportive of the NWCI call for a 40pc legislative quota for women on corporate boards.

“Without quotas, we know that the pace of increased representation will be slow – quite often it’s easier to maintain the status quo. Legislation will ensure we see real change, benefiting women, employees and organisations nationally.”

The NCWI is recommending that the Irish Government establish a legislative quota. This approach should feature a three-year implementation period, it added, with a required benchmark of 50pc improvement each year.

To monitor progress, the NWCI proposed the creation of a dedicated State committee that would publish a report on board composition every six months. It also recommended that appropriate sanctions should be put in place for non-compliance.

“There is robust international evidence that legislative quotas work well,” she added. “The global spread of corporate quotas for women over the past 30 years is both remarkable and consequential.”